From Seed to Feed in 8 days: Barley Fodder Sprouting Trials 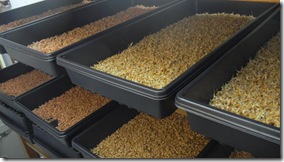 This Spring we are exploring an alternative to how we are feeding our herd (and chickens too!) The idea comes from the notion of fresh sprouts as a “superfood”;  if eating sprouts are super healthy for humans, then wouldn’t that also be true for animals?  As we are finding out, it sure is!

The conundrum… During the off-season for grazing our pastures, which in the Pacific Northwest can be over 6 months depending upon Mother Nature, traditional alpaca farmers will dry lot their animals on a diet that consists of dry orchard grass hay supplemented with a daily ration of dry, pelleted grain.  Think of it as putting yourself on a diet of freeze-dried food all winter long. Pelleted grain supplies additional vitamins and minerals that the hay cannot, but some say pelleted grains can have a tendency to coarsen alpaca fiber over time, something we really don’t want. There’s also the issue of “choke”, which is just what it implies, a danger where an alpaca eats the grain too fast they ending up choking. This usually happens when alpacas are also jostling for prime position at the grain feeders with other animals. But still, we are talking dry, dry, and more dry diet. In fact these pre-mixed, pelleted grains are not very cheap either and hay prices are going up as well. So exploring alternatives to feeding our herd that saves money and is healthier gets my attention.

There are so many benefits I’m discovering the more I work through these trials of producing barley fodder mats for my fiber boys. As a matter of fact, I just came back from my Seedman with 1150 pounds of barley seed that I bought for $200. Figure a rate of 10 lbs of seed used per day for what I need to produce in terms of fodder mats (based on 2% body weights for the herd) this should give me about 100 days supply to continue playing. (I weigh that against the cost of pelleted grain and it’s cheaper than the grain product)

My nutritional analysis just came back from the vet and it’s what we suspected about fresh sprouts…they are a superfood! 🙂 Good stuff!

It takes 8 days to go from seed to feed. You give the entire fodder mat to the animals and they’ll eat the whole thing: roots, barley seed, and the 4-6″ of green grassy growth.

I also am finding that the amount of hay eaten changes too. They eat less hay, because they only need it for roughage rather than straight forward nutrition. I’m considering buying local western-Washington hay, which is cheaper and of lower quality vs. the Eastern-WA orchard grass which seems to be increasing in price each year.

My trials are being done in the garden trays (propagations trays) used for starting seedlings, so they don’t drain. I’m just watering them. However, I’ll be converting over to a flood-and-drain (or Ebb-and-Flow) approach. The idea is to keep the seeds wet, but not in water. Sitting in water they ferment and are prone to molds vs. growing into barley grass.

In my water I’m adding a Vitamin B-1 solution (1tbsp per gallon) and that’s it. However, for the first 24 hours, I soak my seed in a bleach water solution to kill any mold spores. (I’m using field run barley).

The next day I pull the seed out of the water and spread in the trays, about 2lbs per 11″x22″ tray. Then I water with the B-1 solution periodically.

The first few days, lighting is not important. During days 4-8/9 a couple of CFL daylight rated lights green up the grass just fine (no fancy growlights needed).

What you end up with is a 3-4x increase in weight; that is, 2 pounds of seed turns into 6-8 pounds of edible fodder!

Overall, I’m finding my tasks take about 10-20minutes to do each day. I’ve got 10 shelves, each with 4 trays on it currently. Each day the trays move up a shelf towards more lighting. The upper trays have drip irrigation lines (but that’ll change once I go flood-n-drain). I use a sump pump in a rubbermaid tote on a automated timer to water twice a day right now.

So, not only are my animals getting a healthy diet, I eliminate the issue of grain tending to coarsen their fiber and am also reducing hay usage. So far this trial has a green light all around right now. 🙂

In my research, I’ve even seen some farmers mixing up their seed. Instead of all barley, they add some field peas, sunflower seeds, or other grain seeds to germinate as a mix of sprouts thus rounding out other nutrients in the fodder for their animals.  Dairy farmers using a fodder approach see a big increase in milk production. Rabbit farmers see a huge gain in weight and increase in litter sizes.

If you Google “Barley fodder sprouts” and “Peter Doyle” you’ll read some of the Australian based studies and get a good overview as to why someone would choose a fodder production approach. Here are some key links (including a discussion on Alpaca Nation forum):
http://www.alpacanation.com/forum/topic.asp?TOPIC_ID=11330

In the “Picture is worth a Thousand Words” category, here is a set of them that shows the progression over the course of 8 days:

Note: Most of the commonly asked questions can be found in the comments section to this article. But, I’ll also encourage you to check out our other articles about Barley Fodder on this blog as well for even more details:

After reading the articles and comments, further phone/email consultation, support, and system troubleshooting is available for a fee (MC/VISA via phone). Visit our website (www.pacapride.com) for contact information.

UPDATE! We now offer our grow trays for sale! See this posting: https://pacapride.wordpress.com/2013/02/26/barley-fodder-grow-trays-now-for-sale/

Making manifest the change I want to see in the world through the hospitality of a humble little homestead campground with yurts and alpacas.
View all posts by David →
This entry was posted in Ranch Development and tagged alpaca, barley, feeding, fodder, Grain, Paca Pride, sprouting, sprouts. Bookmark the permalink.

264 Responses to From Seed to Feed in 8 days: Barley Fodder Sprouting Trials