The alpacas are all excited with the recent media coverage they received during shearing.  The hoards of crowds, and even a tour bus or two that arrived for viewing, enjoyed the pastoral scene with the vista views and the action at the shearing table.  This year was the year of the poodle dog haircut for some of the animals, as they kept their neck and leg fiber to grow double long for next season’s harvest. These styling animals are now all enjoying the summer days lying in the grass tanning themselves. If you missed all the action, take a look at some of these articles that appeared in the Everett Herald and some videos, from the public who visited, on YouTube!

Alpaca shearing is a team effort at Granite Falls ranch

Here are a couple of compilation You Tube videos from the public visitors, and be sure to check out the last one from the Everett Herald reporter that used a GoPro camera to put together a time-lapse video of shearing an alpaca (in 45 seconds!)

We used a GoPro Hero2 camera and attached it to Uber, the llama, as we walked him and Mucho the llama in the 4th of July “Robe Valley Hill-Billy Indy Day parade”.  You can view the entire album of llama cam pictures on our Facebook page: www.facebook.com/PacaPride including this one: 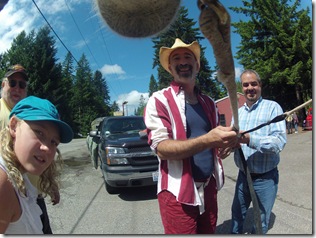 But if you’d like the super-duper, Uber, time lapse video of the entire 45 minute parade in 7 minutes, as seen from the Uber’s perspective, check out THIS video!

From the GoPro Llama cam, attached to Uber the llama

Making manifest the change I want to see in the world through the hospitality of a humble little homestead campground with yurts and alpacas.
View all posts by David →
This entry was posted in Life at the Ranch, Llamas and Alpacas and tagged alpaca, Paca Pride, Press, shearing, video. Bookmark the permalink.