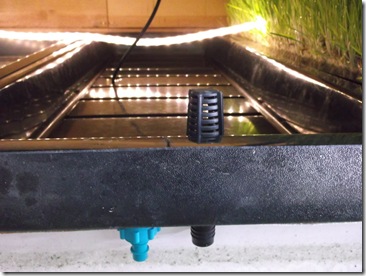 2020 UPDATE: THE MANUFACTURER NO LONGER MAKES THESE TRAYS. AN EQUIVALENT TRAY IS ON THE MARKET. WE ARE CONDUCTING TRIALS BEFORE ENDORSING.

One of our many mantras we live by at Paca Pride Guest Ranch is that our definition of success comes from positioning others to become successful.  On that front we want others to succeed as much as we have with adding Barley micro-greens to your livestock’s diet!

In fact, we’ve heard so much positive feedback about our system from the DIY Fodder Producers we talk to,  that we’ve worked out a deal to start selling Grow Tray Kits to the general public!

While we have single trays available for sale, the most bang for your buck comes from ordering either our 10-pack or our 20-pack where we’ve included a discount. Given that most DIY growers usually choose to have a minimum of 10 tray systems, a bulk rate is something we wanted to be able to offer. 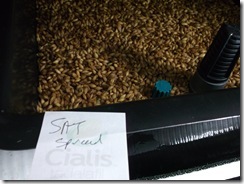 These trays are ideally suited to the various requirements for growing Barley Fodder mats(or other grains too! Wheat is 2nd most popular). 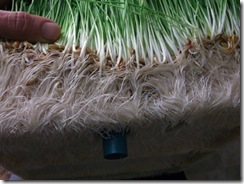 The grow tray includes raised bottom sections that allow the water to drain off into the lower channels assuring excellent water drainage and flow.  The channels direct the runoff to the teal drain (left side in photo at top) which is level with the channels, and slightly lower than the raised sections of the tray.

Along with the main teal drain, the tray also includes an overflow drain. This second drain might be questionable by some until seeing it in action on 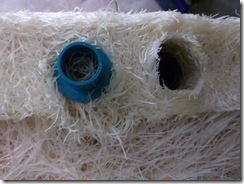 the more mature grow trays with root mats that fill the tray and slow down the flow of water to the main drain.

Both drains have easily removable caps that prevent the actual grain from slipping down the drain. As the root mats grow, the drain caps prevent the roots from completely backing up the water in the tray. At harvest, the drain cap is removed from the root mat, and tapped free of roots, then the tray is washed and readied for the next grow cycle.

Drainage is a crucial function in producing fodder mats. Trays with small drain holes get easily clogged by roots as well as the starchy runoff produced by the growing sprouts. Look for grow trays that feature good drainage to assure consistent production over time. 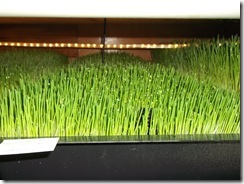 Good, solid, grow trays are a necessary investment to a well running fodder system. You will want to look for trays that are also durable over the long haul.  Our grow trays are a heavy duty plastic that was meant for commercial growing operations. They are very durable trays and will last quite a long time!

Tray size is also another very important characteristic to look for when designing a DIY system. You’ll want to avoid smaller trays that have limits in the size mats they can produce, because as your production goals go up, this will translate into the handling of many small trays and mean more work and effort in harvesting, cleaning, and re-seeding your trays, spending more time in the fodder room.  Too large a tray translates into fodder mats which can become clumsy and unruly to manage. Our grow trays minimize the daily chore in the fodder room by offering the manageability that comes along with a reduction in the individual trays being used to produced nicely sized, manageable fodder mats. 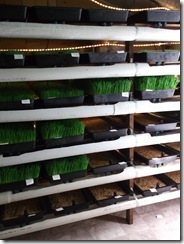 The design of these trays, allow them to sit level, without any tilting required, on a grow shelf of your choosing.  With the drains at one end of the tray, you can create a DIY system that places the drains over the shelf edge and positioned over a gutter system to direct your runoff to the drain.

For the DIY Fodder producer, these grow trays make a great investment! You build the shelves to support the trays, provide water on a timer to each tray using PVC or garden irrigation supplies you can find at your local hardware store, and provide the gutter drainage to direct the runoff to your drain. The addition of some daylight rated fluorescent lights on a timer will help green up any sprouts you grow. 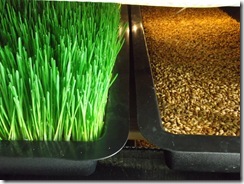 We can ship these trays anywhere within the continental US.

You can send a purchase request to us via email at Info@PacaPride.com for a price quote.

(Be sure to include where the trays will be shipped, for a shipping quote.)

For all orders we accept Mastercard or VISA via phone.

Making manifest the change I want to see in the world through the hospitality of a humble little homestead campground with yurts and alpacas.
View all posts by David →
This entry was posted in Ranch Development and tagged barley, barley fodder, fodder, fodder mat, grow trays, growing fodder, Paca Pride, tray. Bookmark the permalink.