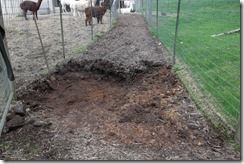 Permaculture principles point out the necessity of capitalizing on one’s resources within the ecology of their own farm or homestead.  This means maximizing the use of all waste streams that come from running a livestock operation.  Of course, it is easy to translate this into utilizing a compost bin for manure collection and then using that awesome product in garden beds or returning out to the pastures.  However, we like our compost bins here at Paca Pride to be the purest possible.  That black gold is our largest harvest from our animals and we love to take full advantage of a compost that is some of the best stuff you can find from an animal.  This means it’s poop, and poop only, that goes into our compost bins to create that rich loam for future use.  But what about the other waste streams from a livestock operation? 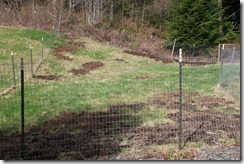 The second largest waste product comes from their feed: hay tailings or extra sprouts from our barley fodder mats that falls to the ground and gets dirty, and not eaten.  It just so happens that hay, brought in from other farms where it was baled, is also a great vector for contamination, especially weed seeds.  As part of the natural process of feeding our herd, they tend to make a mess and leave some of this stuff on the ground.  We try to minimize the loss as much as possible, but still we end up raking their sandy dry lot of hay tailings at least every other day so that their bedroom space remains clean.  The question becomes what to do with it.  It is rich in carbon, but composts slower than manure. We can’t really add it to the compost bin if it’s got some weed seeds, some of them can be hearty enough to survive the compost pile. (It doesn’t take much to compost alpaca dung as it is not a “hot manure” like horse or cow manure.) We certainly don’t want to send it directly out to the pastures, not in that form. 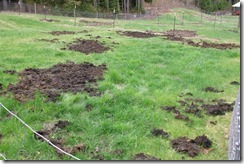 We also face another dilemma with the actual location of our livestock operation too.  As a visitor ventures out to see us, they pass not one, not two, but three different quarry operations before arriving to see some spritely alpacas romping in the fields.  That’s right, we’re in gravel country in the mountains.  This is not an agriculture rich soil here.  That stuff was washed down to the valleys eons ago by the glaciers leaving us with rock, sand, and gravel.  We can’t even think about tilling, aside from destroying the balance of microbes in the soil, we’d end up churning more rocks than dirt.   So again, taking a page from the Permaculture playbook, we follow nature’s example of building soils from the top down.  Our gravel lot just gives us great drainage and means we won’t ever really see mud.  But it also means we lack necessary organic matter and mulch to create a healthy tilth to grow pasture.

Enter Muck Alley… This small, pass through area, used by the herd when they are on their way out to whichever rotational grazing unit is open to them that day, is where everything from the dry lot goes during pasture grazing season.  The alpacas also use this as a way station for pooping, lots and lots of pooping, which we simply do not pick up.  We just keep covering the poop with the hay tailings.  The additional carbon acts like a deep bedding option and some wonderful things start to happen.  First off, it becomes the ultimate worm factory.  Worms horde into the alley.  Second, lots and lots of beneficial nematodes and other microbes start to reproduce.  Third, it sequesters that carbon along with any contaminants in a slow, nature exposed, decomposition process, that weed seeds simply cannot survive.  That extra carbon mass means we need worry little about disease vectors either; the good bacteria definitely outnumber the bad bacteria. Fourth, the action of the herd walking to and fro, gives the right amount of churning to encourage the decomposing. This is about the Soil Food Web cycle first and foremost and we need this type of activity to sustain itself in our pasture ecologies. 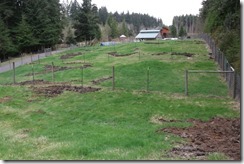 What we end up with is none other than a Dirt Factory! A Tilth building, nutrient rich, top soil amendment that replaces any role a chemical based fertilizer would have in a pasture.  Better yet, unlike those bagged fertilizers that cause a quick burn of activity only to be addictively needed again and again, this amendment builds upon itself and keeps giving.  It introduces way more than fake fertilizers ever can: healthy, mulchy, soil and rich decayed organic matter, worms and microbes.

Once a year, in the early Spring, we ‘muck out’ Muck Alley, taking it back down to the hardpan, and taking out the results to our pastures.  Then we start the process over again for another year of build up.  In fact, however, Muck Alley, is generally doing most of its building up during pasture grazing season, when our Winter Sacrifice Paddocks have transitioned back over to Garden Paddocks.  During the off-pasture season, which can be up to 6 months, Muck Alley just sits decomposing, through the winter, with no additional inputs.  It is ready by Spring for harvesting right when the pastures want to be fed and the mosses are the brightest green.  In the Winter, those hay tailings from the dry lot get raked out to the Winter Sacrifice Paddocks, areas of land allowed to go fallow during the winter as they get grazed down to nothing, poop piles are allowed to accumulate using the hay tailings to cover them and create a deep bedding.  When we transition over to pasture grazing, and after we’ve mucked out Muck Alley, we close off our Winter Sacrifice Paddocks to the herd for the Spring and Summer seasons and use that rich loam, further tractored by our flock of chickens, to grow crops like wheat, pole beans, squashes, and this season, a crop of peas. The land recovers from its fallow state. After we harvest our crop, what’s left are grasses and clovers for the herd to munch back down for the winter time.

The best part is that adding the Muck Alley muck to our pastures is the ultimate in outcompeting the mosses.  By picking the mossiest spots in our pasture to amend and build up, we convert those mosses into more organic matter simply by covering them.  We create toeholds for tilth, micro-swales in a pasture that spread more green and establish a great diversity of alpine meadow plants that include not only grasses, but clovers, plaintain, chicory, dandelion, even herbs like fennel and dill, along with carrots seed-saved from previous gardening seasons. Diversity is the key to a successful Alpine Meadow Ecosystem. 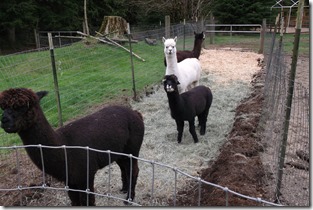 Once we add in our herd of browsers, we maintain that alpine meadow cycle instead of allowing it the natural succession to primary growth forest.  Those browsers make a withdrawal from our Tilth bank account, but we’re keen to have them leave a deposit as well, and Muck Alley acts sort of like a Certificate of Deposit that comes due once a year.  We’ve been using this approach for 5 years now and while on the surface it may appear to be a slower path than what adding fertilizers can give, we’ve definitely seen a longer term picture that is much more sustainable, takes advantage of natural waste streams from our animals, and eliminates the cost of purchasing petro-chemical based fertilizers completely.  As the saying goes, eliminate an expense, and it’ll never rise on you again!

Making manifest the change I want to see in the world through the hospitality of a humble little homestead campground with yurts and alpacas.
View all posts by David →
This entry was posted in Permaculture, Ranch Development, Tilth. Bookmark the permalink.